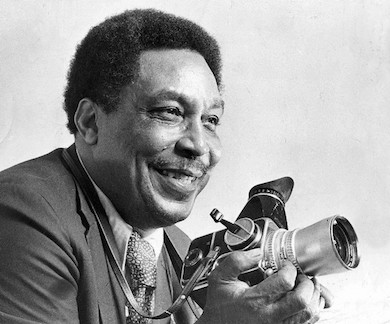 Ernest C. Withers’ interest in photography began in his eighth grade year at a Memphis school. More than seventy years later, he continued to maintain a studio on Beale Street – once the Memphis epicenter of the musical life of the nation. After graduation from high school in 1941, Withers joined the army. He attended the Army School of Photography and later operated a freelance business photographing white soldiers stationed in Saipan. Following his discharge, Withers purchased a photography studio in Memphis with help from the GI Bill.

Throughout the 1950’s, Withers was, in his own words, ‘a news photographer’, ‘recording events that were taking place.’ Momentous events were occurring and he recorded them for African American newspapers across the country. During the 1950’s and 1960’s, Withers traveled throughout the South with Dr. Martin Luther King Jr., James Meredith, Medgar Evers and other leaders of the Civil Rights movement. He provided images that made the dramatic stories of the era – a vivid Dr. King riding the first desegregated bus in Montgomery, murders of Civil Rights workers, voter registration drives, lynchings and the powerful Memphis Sanitation Workers Strike. The result is an encompassing and moving chronicle of the great American crusade of the second half of the Twentieth Century.

As he traveled across the South, Withers’ base was always his hometown of Memphis. His work provides an insider’s view of the Beale Street music scene at the point when Americans – black and white, began to recognize it as a musical Mecca. For more than a century the city had attracted rural African-American migrants who brought their music. Gospel, blues, rhythm and urban dance music rang out from churches and Beale St. clubs. On Saturday nights, Withers photographed audiences at the clubs for a dollar-fifty a shot. He photographed many musicians he knew well. As he did so, the nation’s first radio station with all black programming enabled a wider audience that included young Elvis Presley to hear B.B. King, Ray Charles and a host of others. Many of the local talented musicians came out of Douglas High in Memphis.

Withers’ photographs proclaim the wealth of Memphis’ musical talent. They also showcase the Rock and Roll and blues that emerged from the city’s gospel as well as blues musical tradition. Given the relentless segregation, it was white musicians such as Elvis or Johnny Cash or Jerry Lee Lewis who brought the Memphis sound to the attention of the nation. Withers photographs clearly document the sound that was the product of the city’s black musical culture.

Ernest Withers loved baseball as he loved music. Just as there were separate white and black musical worlds in 1946, segregation of athletes and the plethora of outstanding African American players gave rise to Negro League baseball. Even as Memphis’ musical influence was seeping into the nation, this hallmark of local black athletic culture was on the brink of collapse. Memphis had its own team – Red Sox stars were local heroes. In the forties and fifties, Withers built a fairly lucrative business furnishing publicity shots for the team’s owners and team photos for the fans. Ironically what he recorded in those photographs was the decline of one of the largest black owned businesses in the country. In 1947, the Brooklyn Dodgers signed Jackie Robinson who played for the Kansas City Monarchs; the same year the Cleveland Indians snapped up Larry Doby. They were just the vanguard – almost immediately, Negro League owners began to sell their Roy Campanellas, their Don Newcombes and their Monte Irvins to the majors. The process was irreversible; attempts by a few owners to sustain ‘race conscious baseball’ were fruitless. Withers recorded the collapse of the Negro League, which occurred, he said, as the result of changing times. In this case, as with his chronicling of Martin Luther King’s crusade or of Beale Street, Withers’ more than 50 years of images validates the message emblazoned on his business card: PICTURES TELL THE STORY. 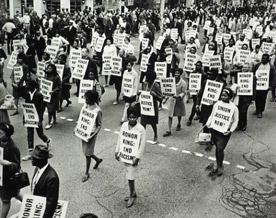 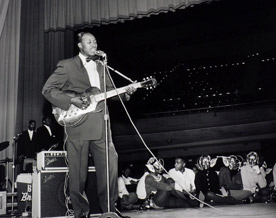 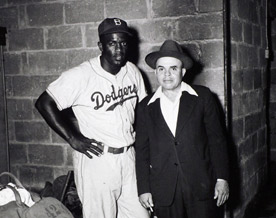 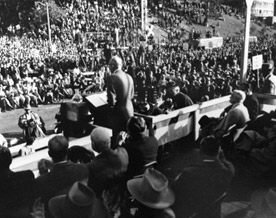